Up just after 9am again, but not tired – was just distracted listening to the radio. Omelette with mixed peppers and cherry tomatoes for breakfast. Really like the fresh salad element to an otherwise boring omelette.

Dull weather outside but finally got my “summer” holiday booked last night so something to look forward to. Friday is normally shopping day, but we’ve got a fair amount of fresh veg leftover so I should be able to last until the weekend.

As it’s Friday I’d planned burgers for lunch; bacon burgers. Had a bit of a miz afternoon and ended up feeling down. No choccie or wine to turn to for comfort so had a cup of tea and some almonds. Not the same 🙁

Made a big pot of mild and creamy Thai green curry, with lots of veggies and chicken for dinner. A hug in a bowl 🙂 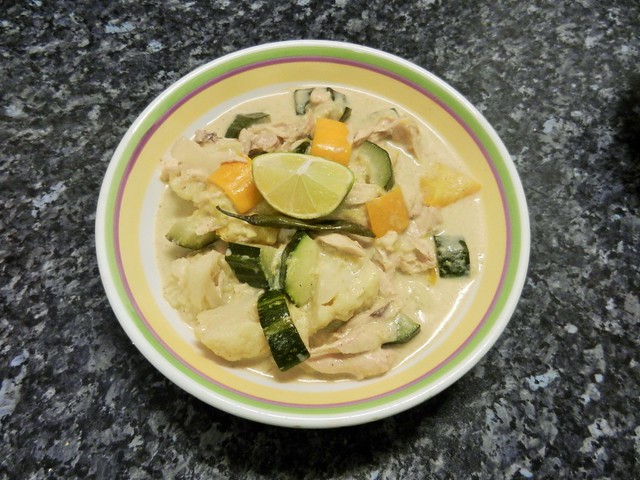 Friday night and, again, nothing on TV so in bed at 10pm.

Woke up late. Not to worry, I’m sure I’ll have this sorted in time for next week 🙂

Omelette with mixed peppers for breakfast, then whipped up a batch of frittata muffins to use up the remaining veggie leftover scraps. The prosciutto cups didn’t even stick to the tray, they just came out nice and crispy. 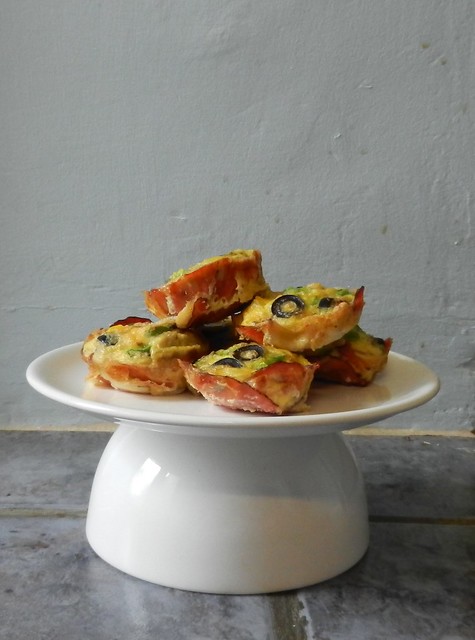 Had those for lunch with a bowl of smoky bacon, veg and tomato soup. Is that too much bacon in one meal? Nah. Kitchen again looking a bit of a mess – life would be so much easier if I had a dishwasher but sadly no space in my dinky kitchen. Tackled it in about an hour of hard-graft.

Made some yummy Black forest ham-wrapped peaches, crisped up in a hot pan before serving, as pre-dinner snack with olives. Dinner was Discovery chicken with cocoa dusted cauliflower and kale. Yes, more kale! This stuff is never ending – but it is the Chuck Norris of all veg.

Late start, due to staying up too late and falling asleep on the sofa. Not good. Made an omelette with smoked mackerel for breakie and downed a strong coffee with ghee (bullet-proof coffee) before heading out to the gym.

Good session but it’ll be my last daytime visit for a while since I start an office based job again next week. Will have to try for evenings and weekends with the other muggles 🙁

Lunch was a no-brainer – roast chicken and coleslaw salad ready in the fridge. Nice cup of coffee then out to run errands.

Enjoyed 2 pots of Twinings Earl Grey tea while abusing Costa’s free Wifi. I didn’t think I liked Earl Grey – turns out I just don’t like it with milk. The things you learn! 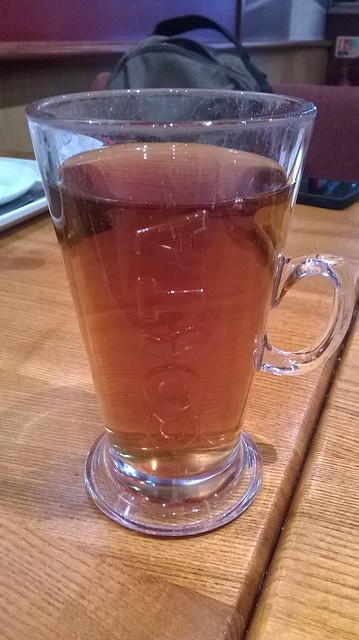 I must have resurrected my shopping mojo as I had a strong urge to go out and treat myself to something nice. This time food! Nothing bad. No sweet treats, cheese or booze. We still haven’t celebrated my new job yet so seems like a good enough excuse to me. Quite good fun trawling around Waitrose for Whole30 compliant treats. Settled on some chilled seafood; crab claws, prawns and mussels to have before dinner. Not terrible but not great either. All a bit over-cooked. Shan’t buy it again.

Dinner was roast aubergine stuffed with ragu, served with roasted sweet peppers and some kale. 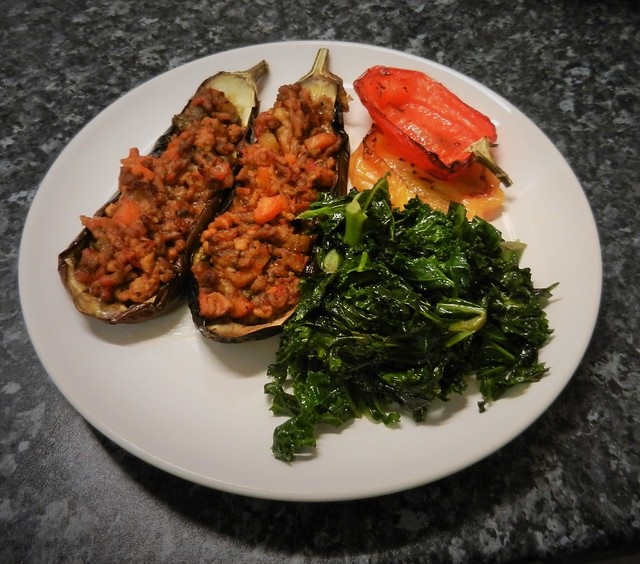 Need some practice getting up early so off to bed at 10:30. Zzzzzzzz

No morning headache. Think I must be over the worst of the withdrawal symptoms now 🙂 Another omelette with peppers for breakie. Never gets tired.

Had a good, healthy sized lunch of mackerel, beetroot and green bean salad followed by a cup of black tea, but felt a bit woozie in the afternoon so had some coconut flakes.

Lamb curry was ready in the fridge so just had to be reheated and served with lots of veggies. 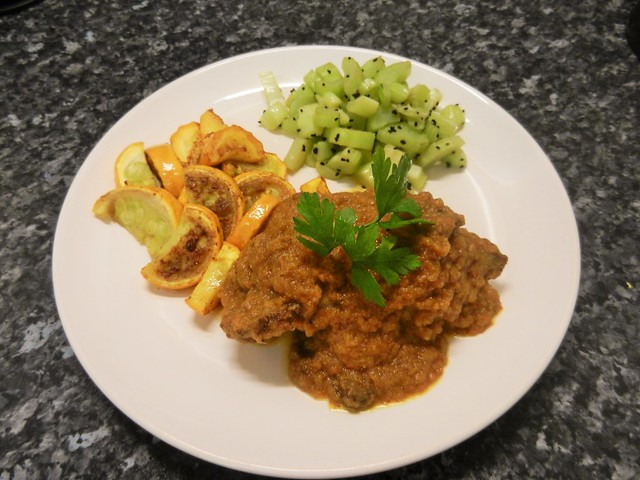 More black tea and stayed up too late watching TV.

Great sleep last night, and woke up with no headache! Still only got up at 9am but no midnight walkies.

Kitchen looked like a bombsite and couldn’t avoid it much longer; still had lamb curry and a batch of soup to make. While big, cook-up days are a great idea for getting ahead, and having a fun day in the kitchen, the clean-up is a bitch.

Completed chores in time for lunch; a leftover Sunday chicken drum with coleslaw, followed by a handful of toasted coconut flakes seasoned with cinnamon and various other spices.

Had some errands to run in town so stopped for a Starbucks. Gross. Burnt and bitter tasting filter coffee. Oh well, I didn’t go for the drink – I only went for the WiFi 🙂

Famished after a hard hour of shopping, I reheated some of the ratatouille I’d made yesterday and quickly mixed some lamb mince with herbs for mini meatballs. 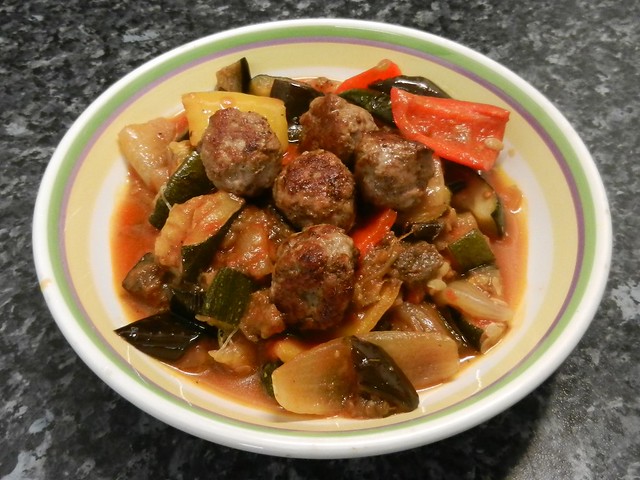 Nothing worth watching on TV so pottered online for too long then off to bed at 10:30

After a very poor night sleep wise, slumped into the kitchen for coffee and made frittatas with leftover veggies for brunch. Foul weather outside, and I’d forgotten that roads in London would be closed, so ditched the plan to get out and do things. Eventually got my behind in gear and made chicken stock (salvaging the cooked wing meat), roasted vegetable ratatouille, more olive oil mayo, a batch of coleslaw and then Sunday lunch 🙂

Tip: Had the foresight to make the mayo in the food processor first, then shred the coleslaw veg into the “dirty” bowl. Saved on a whole lot of washing up.

Had decided to make it like a real, proper Sunday lunch so we had roast chicken, carrots, parsnip and shallots plus swede roasties.

No vino 🙁 so made do with fizzy water and lots of lime and lemon. 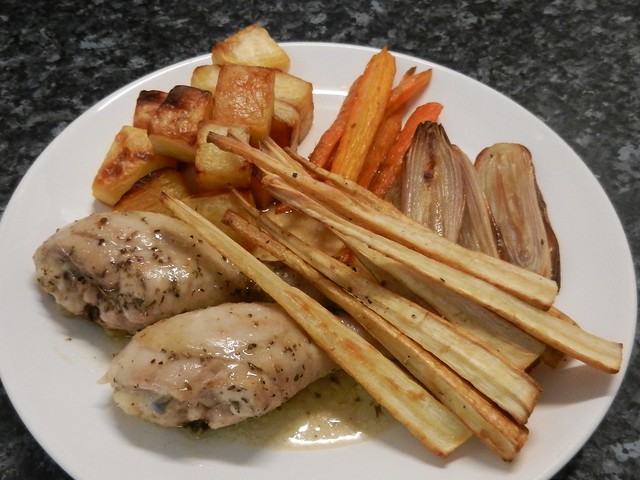 Lunch was fairly late so only needed a light supper of strawberries dunked in macadamia nut butter. Watched a terrible   movie and hit the hay at 10pm.

Not a great night’s sleep. Seems I’ve been sleep walking again. Got a nice mug of coffee and an avocado and tomato stuffed omelette for breakfast and drooled at food TV.

Had a quick lunch with the last of the smoky bacon, veg and tomato soup, then filled the day with a nice walk around a National Trust house and gardens, and a cup of coffee in their tea room.

Stopped off en route home for some Whole30 compliant snacks from Waitrose and, as we couldn’t have a beer, enjoyed a pot of loose leaf tea each in a local bar. Very civilised 🙂

Late dinner of egg fried cauliflower “rice” with pork and prawns, after far too many olives and anchovies. Over stuffed.

Not a good night’s sleep. 🙁

Today was going to be a bit of a challenge. A lunch date out in town with friends. I agreed to this weeks ago, before the Whole30 because a good idea. I made sure I had a decent breakfast so I wouldn’t be starving at midday.

Lunch was a success – managed to get grilled sardines for a starter (hold the croutons) and a steak for main course, with no chips but extra salad instead of chips. While the other girls had a glass of wine each I guzzled a big bottle of sparkling mineral water. No pudding, just an espresso. All in, very nice.

Friday night, can’t go to the pub and no other plans so back to local supermarket for remaining shopping. Rock and roll, baby! Did treat ourselves to some marinated and stuffed olives plus almonds as a pre-dinner nibble. Dinner was a yummy bowl of kale topped with garlic, lemon and rosemary chicken thighs prepared by the Man of the house 🙂 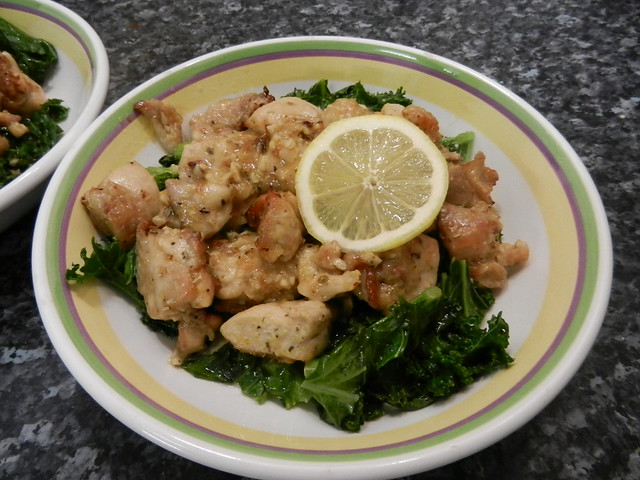 Had a few very ripe strawberries as dessert.

Stayed up late watching a movie so only go to bed at 11pm.

Woke up feeling a little better, but still not full of bounce and sparkle. Got to practice getting up earlier. Made myself a plate of sweet potato hash and fried eggs for breakfast while ignoring the mess in my kitchen.

Busied myself with organising my wardrobe. A lot of stuff still fits which is good (for shopping budget purposes) but a tad did appointing (from a vanity perspective!). Starting a new job in a couple of weeks so need to get out of the shorts and t-shirt look I’ve been abusing for the last 6 months.

Had some black coffee while sorting a few Ebay bits – seemed to abate the headache. That was until the neighbours who like to crank up their car stereo, or just scream and swear at each other, get started. Could soo have done with a latte. Or a glass of wine. Maybe even a bottle 🙁

Tuna deli salad with an extra dollop of mayo for lunch, and a spoonful of the macadamia nut butter that arrived in the post. Lush 🙂 Headache came back so downed a couple of ibuprofen. Not sure they’re Whole30 compliant but had to try something.

Was still feeling very grumpy come evening so took 3 huge bags of clothes and shoes to the charity bins. No idea where I was hiding this stuff- my flat is tiny and I have no clothes! Cleaned the kitchen, again. I seem to get a lot done fuelled by grump.

Dinner was Thai fish cakes and som tam salad – Mr’s speciality. The salad is basically crunchy ribbons of raw veg and mango, dressed with lime. Very filling and satisfying so will have to remember to include more raw veg with dinners next week.

Stayed up too late watching TV so only went to bed at midnight.