Woke up with a banging headache, again. Had my left over ginger tea rejuvenated, which was still pretty strong given the 7 slices of ginger I’d used last night. Breakie of sweet potato hash, bacon and eggs with more ginger tea and I felt pretty much human.

Had a bit more prep to do; 2 soups, a batch of ragu for next week, olive oil mayonnaise (man’s job) and a tub of tuna deli salad. Thankfully the weather has cooled down so not too unbearable spending a couple of hours in the kitchen, but headache kicked in again around 11. Drank a pint of water. Making ragu without most of the contents of a bottle of red wine just feels wrong…..

Managed to have lunch at lunchtime for a change (bad Sunday habits) – rather tasty Mulligatawny soup. 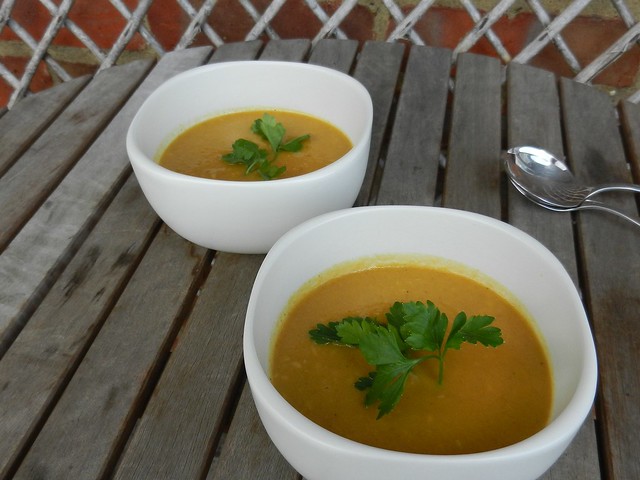 There would be no afternoon visit to the pub so instead we went to my folks’ house to mow the lawn and keep my mind off proper lattes and artisan cheese…..

Back home and got the munchies around 5pm so had a few almonds and a cup of ginger tea to keep me going until dinner. Getting a bit of a taste for ginger tea; might keep it up after Whole30. Allergies in full swing but could be due to time in the garden. Dinner was scheduled to be salmon ceviche with avocado but we forgot to add the avocado.

Still had plenty to eat and didn’t need any additions. In bed by 10:30 – a bit later than planned but the Commonwealth Games closing ceremony/ Australian tourism board advert was on TV.