Got up late. The glass of water served to my bedside wasn’t as enticing as a cup of tea 🙁

Cheered myself up with soft boiled eggs and griddled asparagus spears, and a few more glasses of water.

Actually not too bad and I could probably do with the extra hydration. Completed my menu and shopping list, downed a coffee with coconut milk then hit the supermarket. Managed to get everything and still spent less than £50 – with enough food for the whole week, 3 meals a day, and a few roll overs for week 2 and later. Did look at getting some non-dairy milk but all full of rubbish and mostly sweetened. Not quite dedicated enough to make my own nut milk yet. Missed lunch as we were shopping, and breakie had been quite late, so decided on an early dinner. While we were out, both got tempted by the coffee shop so gave in, but just for plain double espressos. Nice to feel like we can still go out-out 🙂

Hoping that this elimination diet will help with my allergies ( been sneezing my head off all week) and help me get my sleep patterns back to normal. No milk means no tea, and I can only drink so much black coffee, so my caffeine intake should reduce consequentially. No alcohol means we shouldn’t be staying up late watching rubbish on TV, so should get to bed earlier.

Dinner was a new recipe for burgers with ground bacon mixed in – success! Lettuce wraps for buns, as normal, plus roasted cherry toms to use in place of tomato sauce and some spiced up sweet potato chunks. Nearly went for the mayo and chutney but caught myself in time. 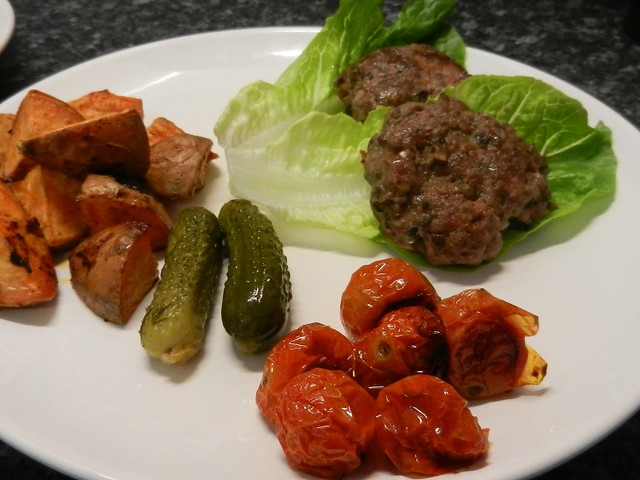 While that was being assembled I also made a batch of meatballs, shredded some sweet potatoes, parboiled some other sweet potatoes and riced a whole cauliflower ready for later in the week. Got a few more bits to prep tomorrow but that’ll be it for the week.

After dinner I did get a fancy for some choccie, but not really a craving. Just wanted an after-dinner treat on a Saturday night as normal. Had some water instead and a cup of lemon and ginger tea before bed. Was actually feeling sleepy at 9pm so this must all be doing something right, but still didn’t get to bed until nearly 11 for watching recordings of QI. Ooops.