Having shirked the BBQ and beer event at a nearby pub (even though it would have been amazing and their beer is good, it’s expensive and it’s waaaay too easy to spend a long time there) I made it up to my long suffering Hubby by recreating the evening at home. I stuck with the meat and salad, with matching beers, but omitted the Boston beans (legumes) and corn on the cob (corn, nuff said). 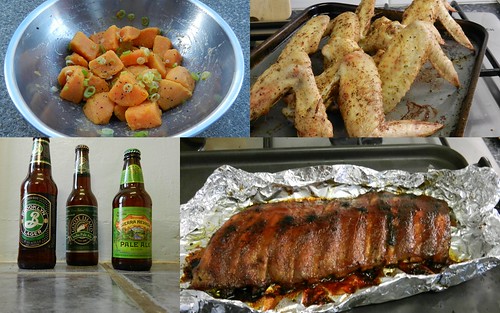 I normally pressure cook pork as spare ribs but they always seem to taste a bit Chinese-takeaway, so this time I used a spicy chipotle dry rub (Williams-Sonoma) and baked a whole rack in the oven, wrapped in foil. 1½hrs @ 160°c did the trick, followed by baking unwrapped for 25 mins, oven turned up to 180°c, with a glaze made of:

Ribs got basted again at half-time. The wings got a chilli-lime sea salt rub (also c/o Williams-Sonoma). 180°c as the oven was already on, and I only have one oven … oh, the hardship…. and 25 mins later – taa daa! 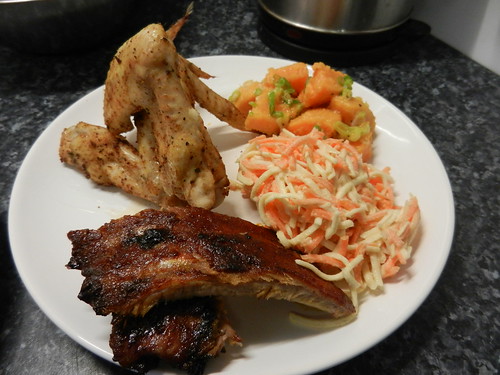