Quick update after my weekend class at Leiths.
After a light warm up (thinly slicing carrots and cucumber for a Thai salad) we moved straight on to filleting and skinning flat fish and round fish. As well as getting used to the different knives we were told to become familiar with our fish. This is Brian the Lemon Sole: 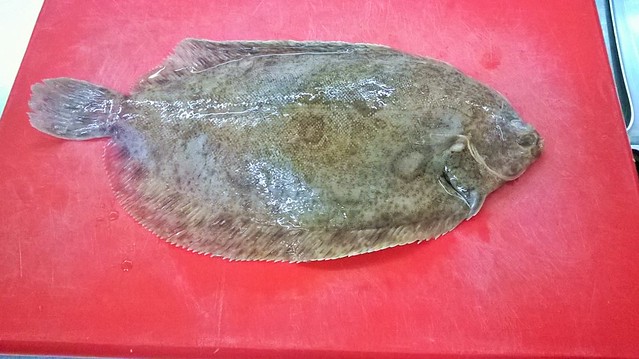 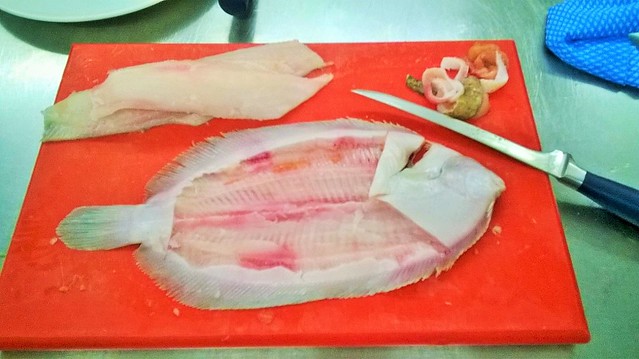 I named my Sea Bass Dave, but my hands were too icky to take a photo with my phone.

All neatly packed to take home then we got started on portioning the chicken: 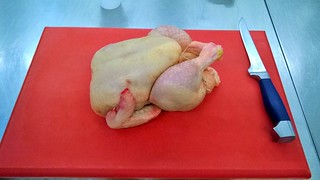 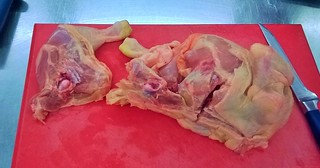 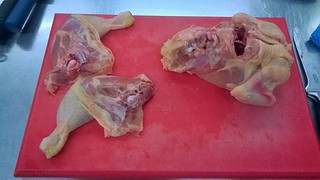 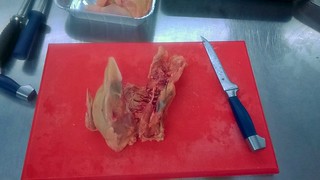 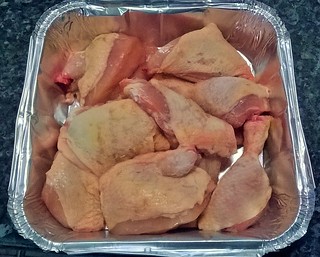 Wow, yesterday was a big old day. Up and into town on first (off-peak) train of the morning. Camera went flat on train so got no photos all day! Hopped on Jubilee line from Waterloo to London Bridge and spent a very pleasant hour moseying around Borough Market with a take away from Monmouth Coffee.

Enjoyed lots of charcuterie and cheese samples, and bought some to bring home. Back on Jubilee line to North Greenwich. Passed Boris in the station, as you so, and headed to the Meridian Line. Went into the O2 and gapped at the inside of the structure. Grabbed a quick lunch at GBK – Paleo friendly bun-less burgers. Good stuff.

Back outside into the sunshine and onto the Emirates Skyline cable car across the Thames. Saw it a few weeks back when I was in town for work and thought, must try that. 1 word : AWESOME!!!! Hubby got lots of iPhone pics as we flew over to the Queen Victoria Docks. At the other end, well there’s not that much. ExCeL has come a long way since I last had an event there and there are a couple of hotels but it’s the City Airport and island area that has been hugely regenerated. New houses, little shops, nice riverside walk areas. Can’t say I’d move there as it’s a heck of a long way out, as our DLR journey back to Tower Gateway proved, but for people who work in Canary Wharf it could be pretty nice.

Took the DLR (Docklands Light Railway) as hubby hadn’t been on before, and got to see a lot of the area. Some not so pretty, but better than being underground on a hot day. Thought it would be good to take the underground to St James park instead of walking, but big mistake on stuffy tube train. Popped up to ground level and strolled in the shade along the park to Buckingham Palace. Moment of patriotic pride at how good the place looked with the flags out. Snooty snigger at tourists filming nothing thru the gate with iPads. Why?! Do you really think HRH is going to wander out into the yard with the corgis? Is Philip going to bring out the bins in his dressing gown?? Dodged through the Hoy ploy and got back on the road to Belgravia. Then remembered we didn’t want to go to Belgravia at all and actually needed to head back to Piccadilly Circus. Sigh. So at 4pm on a Friday afternoon in tourist season we took the tube to Piccadilly just to go to Whole Foods. Never disappoints. If we lived nearer one of these stores, we’d go broke bloody quick! Ducked through some side streets to a quiet Pret a Manger for restorative caffeine and water, and aircon, to plan our evening……..

Just a quick post this morning as we’re off London today.

Route has been carefully planned to take in Borough Market, Ottolenghi and a pop up Street Food venue – seeing a theme? 😉

Going to eat until my tummy goes pop!

Pics and updates later if I can still move 🙂