I found this recipe on Paleo Pot a few weeks ago and became a little obsessed with it. Problem was I didn’t have a slow cooker or canned chipotles, and I object to paying for fresh beef stock unless it’s actually going to be part a noticeable element of the final dish e.g. French onion soup.

So I had a trawl around the great online library and cross referenced a few different recipes and techniques to come up with my own. Result, AWESOME! if I do say so myself 🙂

Step 1: went to farm shop and asked if they had any unrolled brisket. Nice chap went out the back and returned with what looked like a whole side of cow. Ooops. I came out with just under 2kg of beef, which is about equivalent to the 4lb maximum mentioned in the Paleo Pot recipe, @ £8.50/kg – not bad.

Step 2: When I got this huge slab of meat home I realised that I didn’t have a big enough roasting tin. No problem. I thought it might be a bit too much for just the 2 of us to eat in a week, even with leftovers, and I wasn’t 100% sure how it would come out [ this being my first attempt at cooking brisket ] so I halved it and put a piece in the freezer for another day.

Step 3: Mixed up a blend of Texas-style BBQ seasoning [sorry, secret recipe] and gave the beef a good rub down before wrapping tightly in cling-film and stashing in the fridge over night.

Step 4: Heat oven to 180c and give the beef a good blast for 1hr. After that, reduce heat to 150c and carefully pour in a mixture of home-made chipotle abobo sauce and fresh apple juice. This is just to give enough liquid to help braise the meat, so only needs to be about 2cm depth. Apply a lid, or cover in foil, and ignore for 2 hours.

At this point it was very late in the evening so I just turned off the oven and left it there over night.

Next day it was chilled in the fridge, so I could scoop off some of the excess fat and it makes it easier to cut thin slices. To serve, I cut 1cm thick slices across the grain and reheated it in the braising sauce.

My original inspiration had been the Chipotle salad bowls we enjoyed in San Francisco, with crunchy salad, sautéed peppers and onions, avocado and a little cheese  – so that’s what I did 🙂 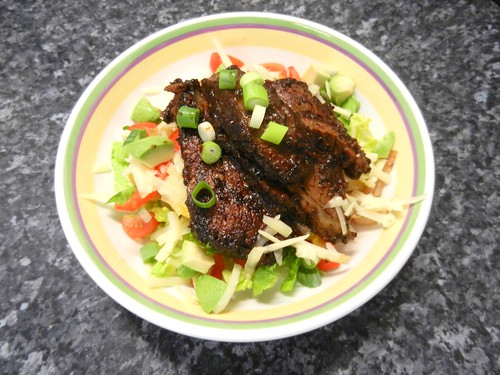 Note: only half of the batch was used for dinner so there are leftovers for later in the week, plus there was enough to sneak a slice onto breakie with eggs and hash. Bonus!

One Reply to “Barbacoa Beef Brisket”